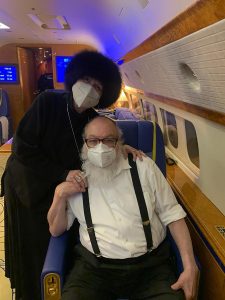 Jonathan Pollard and his wife Esther sit inside a private plane provided by American casino magnate Sheldon Adelson, on route to land in Ben Gurion International airport near Tel Aviv, Israel, Wednesday, Dec. 30, 2020. Pollard, who spent 30 years in U.S. prison for spying for Israel, arrived in Israel early Wednesday with his wife, triumphantly kissing the ground as he disembarked from the aircraft in the culmination of a decades-long affair that had long strained relations between the two close allies. (AP Photo/Israel Hayom)