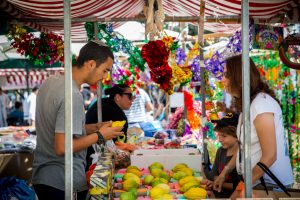 Secular and religious Jews shop at the »four species« market in Tel Aviv, on October 14 , 2016 before the Jewish holiday of Sukkot. The market sells the four species etrog, lulav, myrtle and arava used during rituals in the week-long Jewish holiday of Sukkot. Sukkot commemorates the Israelites 40 years of wandering in the desert and a decorated hut or tabernacle is erected outside religious households as a sign of temporary shelter. Photo by Miriam Alster/Flash90. *** Local Caption *** ?? ????
?????
????
?????