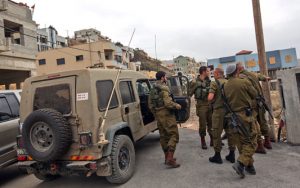 epa03973886 Israeli army officers arrive to inspect the site where mortar shells had come down in an open area near the Druze village of Majdal Shams, Israeli, at the Israeli-Syrian border, on 02 December 2013. The mortar shells have been fired from the Syrian side of the border, apparently during the ongoing conflict between the Syrian army and rebels and most likely came down here unintended, local sources said. EPA/ATEF SAFADI