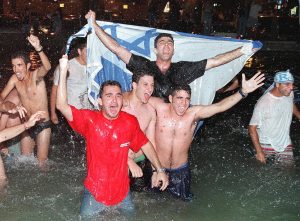 Flag-waving Israelis, singing and dancing into the fountain at Yitzhak Rabin Square in Tel Aviv, celebrate, late 09 May, the victory of the transsexual Israeli singer Dana International in the Eurovision song contest in Birmingham. Israel’s entry of Dana International, who was born Yaron Cohen but underwent sex change surgery in London at the age of 24, provoked protests from many of the country’s increasingly influential ultra-Orthodox Jews. dpa |