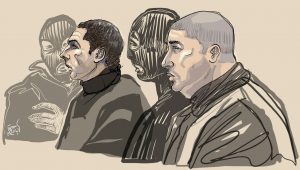 This drawing by Igor Preys shows the accused Mehdi Nemmouche, with a clean shaven face, and Nacer Bendrer at the session of the announce of the penalties at the trial for the terrorist attack at the Jewish Museum in Brussels, at the Brussels Justice Palace, in Brussels, Monday 11 March 2019. Nemmouche and Bendrer are accused of committing a terrorist attack on 24 May 2014 at the Brussels Jewish Museum, killing four people. PUBLICATIONxINxGERxSUIxAUTxONLY IGORxPREYS 05546072