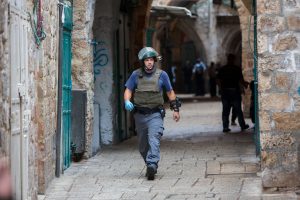 Israeli security forces seen patrolling the muslim quarters in Jerusalem’s Old City, following a terror attack where a Palestinian woman stabbed an Israeli man near Lions Gate of Jerusalem’s Old City on October 07, 2015. Police said the stabber was shot in by her victim, who was stabbed in the back. The victim is in moderate condition, and the attacker in critical, both were evacuated to Hadassah EIn Kerem hospital. Photo by Yonatan Sindel/Flash90 *** Local Caption *** ôéâåò
èøåø
ã÷éøä
äòé÷ äòúé÷ä
éøåùìéí