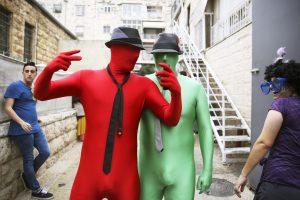 Young Israelis dress up, as is customary during the Jewish holiday of Purim, at a street party, in the streets of the neighborhood of Nahlaot in Jerusalem. The Jewish holiday of Purim commemorates the Jews‹ salvation from genocide in ancient Persia, as recounted in the Book of Esther which is read in synagogues. Other customs include: sending food parcels and giving charity, dressing up in masks and costumes, eating a festive meal, and public celebration. March 17, 2014. Photo by Nati Shohat/ FLASH90