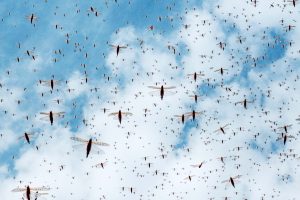 TOPSHOT - A picuture taken on February 9, 2021, shows a swarm of desert locust fly after an aircraft sprayed pesticide in Meru, Kenya. - The United Nations Food and Agricultural Organisation works with a variety of Kenyan security, logistics and charter companies who have expanded their operations to closely track swarms of locusts in East Africa, before dispatching teams to targeted areas to spray the insects with pesticides to prevent damage to crops and grazing areas.It has been over a year since the worst desert locust infestation in decades hit the region, and while another wave of the insects is spreading through Somalia, Ethiopia and Kenya, the use of cutting edge technology and improved co-ordination is helping to crush the ravenous swarms and protect the livelihoods of thousands of farmers. (Photo by Yasuyoshi CHIBA / AFP) (Photo by YASUYOSHI CHIBA/AFP via Getty Images)