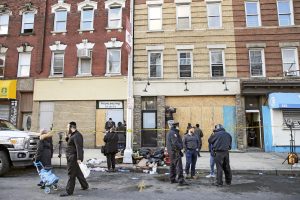 People board up the front of a kosher supermarket thats was the site of a gun battle in Jersey City, N.J., Wednesday, Dec. 11, 2019. The two gunmen in a furious firefight that left multiple people dead in Jersey City clearly targeted the Jewish market, the mayor said Wednesday, amid growing suspicions the bloodshed was an anti-Semitic attack. (AP Photo/Seth Wenig)