Pictures of the Decade 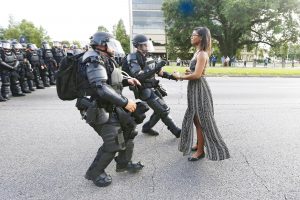 Lone activist Ieshia Evans stands her ground while offering her hands for arrest as she is charged by riot police during a protest against police brutality outside the Baton Rouge Police Department in Louisiana, U.S.A., July 9 2016. Picture taken 9 July 2016. Evans, a 28-year-old Pennsylvania nurse and mother of one, traveled to Baton Rouge to protest against the shooting of Alton Sterling. Sterling was a 37-year-old black man and father of five, who was shot at close range by two white police officers. The shooting, captured on a multitude of cell phone videos, aggravated the unrest coursing through the United States in previous years over the use of excessive force by police, particularly against black men. REUTERS/Jonathan Bachman/File Photo SEARCH »POY DECADE« FOR THIS STORY. SEARCH »REUTERS POY« FOR ALL BEST OF 2019 PACKAGES. TPX IMAGES OF THE DAY. - RC2SND9DGLVA