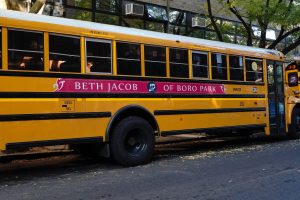 October 6, 2020, New York, NY, United States: A view of Beth Jacob school bus parked along the street..Borough Park is one of numerous Brooklyn neighbourhoods that are witnessing a spike in the number of COVID-19 cases as New York City overall continues to trend down to around one percent infection rate. Many of the neighbourhoods experiencing a spike in cases are Orthodox Jewish neighbourhoods which have had issues with authorities in limiting large funerals and weddings. New York City Mayor Bill de Blasio has announced plans to close nonessential businesses and schools in nine neighbourhoods where positive Covid-19 rates have been higher than 3 percent in the past 7 days. New York United States - ZUMAs197 20201006_zaa_s197_271 Copyright: xJohnxNacionx