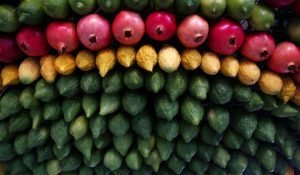 October 21, 2018 - Nablus, West Bank, Palestinian Territory - A ›’sukkah« with fresh fruit is seen in a home of A member of the Samaritan sect during the holiday of Tabernacles, or Sukkot, on Mount Gerizim, on the outskirts of the West Bank city of Nablus, October 21, 2018. Sukkot is commemorates when God protected the Jews in their 40-year desert march from Egypt to the Holy Land. Samaritans in general trace their lineage back to the biblical tribes of Menashe and Ephraim, the sons of Joseph. They defied imperial conquests and clung to the land while much of the population of the Northern Kingdom of Israel was exiled to Assyria — presently northern Iraq — by King Sargon II in 722 BCE |