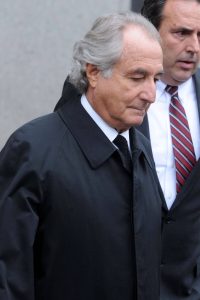 January 22, 2014, Manhattan, New York, United States Of America: NEW YORK, NY - JANUARY 22: Bernie Madoff has suffered a heart attack in federal prison, according to a report on CNBC. Madoff is serving 150 years in prison for defrauding customers as part of a $17 billion Ponzi scheme over several decades. The convicted felon is recovering from a heart attack and is back in prison after hospitalization in December. Madoff, who is 75 years old, is said to be suffering from stage four kidney disease and is not on dialysis at this point, the report said on January 22, 2014 in New York City. ..People: Bernie Madoff. Manhattan United States Of America - ZUMAs214 20140122_zaa_s214_013 Copyright: xSMGx