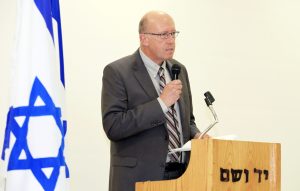 In this picture taken Dec. 8, 2014, and released by Yad Vashem, Holocaust historian Jan Grabowski gives a speech at Yad Vashem, the Israeli Holocaust research center, during a ceremony in which he was awarded for his scholarship, in Jerusalem, Israel. Dozens of international historians have come to the defense of the Holocaust scholar who is being accused of slandering Poland’s reputation with research that focuses on the participation of some Poles in the killing of Jews during World War II. The Polish League Against Defamation said last month that Jan Grabowski’s scholarship »falsifies the history of Poland.« The international historians called the statement against him a »distorted and whitewashed version of the history of Poland during the Holocaust era.« (Isaac Harari / Yad Vashem via AP) |