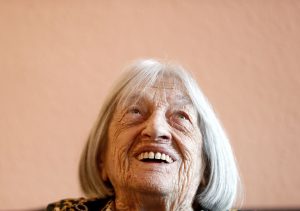 Agnes Keleti, former Olympic gold medal winning gymnast, smiles at her apartment in Budapest, Hungary Wednesday Jan. 8, 2020. Keleti is turning 99 on Thursday but even a nine-year-old would have a hard time keeping up with her irrepressible energy and enthusiasm. Keleti won 10 Olympic medals in gymnastics, including five golds, at the 1952 Games in Helsinki and at the 1956 Games in Melbourne, and she is now the oldest living Olympic champion. (AP Photo/Laszlo Balogh)