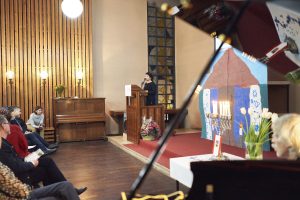 Opening of the new Masorti International School in Berlin on 06/12/2018. The school is located in Roscherstr. 6, 10629 Berlin and housed within a former christian community house. Masorti Judaism is an egalitarian movement, which is fully committed to halakhah, Jewish law, being open to finding new answers to the new questions arising in the 21st century.
›Masorti Judaism‹ and ›Conservative Judaism‹ are two terms for one movement. ›Masorti‹ is the name used internationally to refer to this movement, and ›Conservative Judaism‹ is the name used in the United States.
Ideologically, the movement is located in the middle ground between Reform and Orthodoxy. In Germany, there is sometimes a confusion of terms, since people might use terms such as »liberal« or »progressive« to refer to everything which is not Orthodox. (Photo by Gregor Zielke)