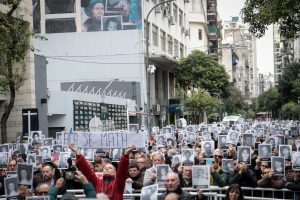 People hold up pictures of victims at a commemoration ceremony 25 years after the terrorist attack on the Jewish community AMIA on 18 July 2019 in Buenos Aires, Argentina. July 18 is the twenty-fifth anniversary of the repudiable attack on the Mutual Association Israelita Argentina (AMIA). The terrorist attack perpetuated in 1994 killed 85 people and hundreds of wounded.The tribute to the victims of the terrorist attack against AMIA began at 9:53 with the sound of sirens, church bells and bells in schools and public spaces and organizations throughout the country. (Photo by Federico Rotter/NurPhoto) | Keine Weitergabe an Wiederverkäufer.