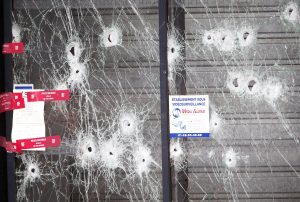 Bullet impacts are seen on the glass store front at the Hyper Cacher kosher supermarket January 12, 2015 near the Porte de Vincennes in Paris, where four hostages were killed on Friday. Jewish schools and synagogues in France have been promised extra protection, by the army if necessary, after killings by Islamic militants in Paris, the head of the community’s umbrella group said on Sunday after a meeting with the French President. REUTERS/Charles Platiau (FRANCE - Tags: CRIME LAW POLITICS CIVIL UNREST SOCIETY) - PM1EB1C11ZT01