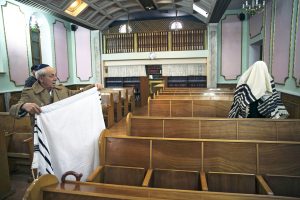 Jewish men attend the morning prayer at a synagogue in Donetsk, eastern Ukraine April 20, 2014. A Ukrainian rabbi whose congregation was the target of an anti-Semitic leaflet that drew global media interest and condemnation from the U.S. government believes it was a hoax and wants to put the matter to rest. Following earlier Russian allegations of anti-Semitism aimed at the new Ukrainian leadership, the rabbi’s call for an end to the furore seems unlikely to prevent mutual accusations over minority rights continuing to inflame the conflict. REUTERS/Baz Ratner (UKRAINE - Tags: POLITICS CIVIL UNREST RELIGION) - GM1EA4K1A6N01