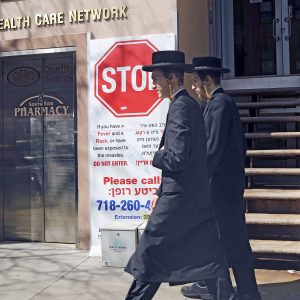 NEW YORK, NEW YORK - APRIL 10: A sign warns people of measles in the ultra-Orthodox Jewish community in Williamsburg on April 10, 2019 in New York City. As a measles epidemic continues to spread, New York City Mayor Bill de Blasio recently announced a state of emergency and mandated residents of the ultra-Orthodox Jewish community in Williamsburg at the center of the outbreak to get vaccinated for the viral disease. Those who choose not to will risk a $1,000 fine. (Photo by Spencer Platt/Getty Images)