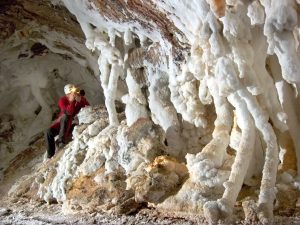 Czech and Iranian speleologists revealed the probably longest salt cave in the world in Queshm south Iran. The newly revealed Cave of Three Nudes is over six kilometres long, while the officially longest Malham Cave in Israel is 5.685 metres long. The Czech-Iranian expedition found a connection between two caves one of which is 5.190 metres long and the Czechs found it in 1999. A commission of the International Union of Speleogy (UIS) will officially decide on the cave’s length. The expedition thus needs to process detailed maps of the cave. Czech speleologists, who work at Prague’s Charles University, have visited Iran for the seventh time. Foto: Namak +++(c) dpa - Report+++ |