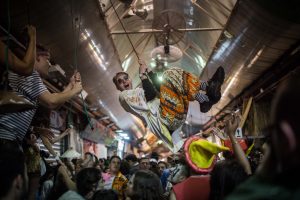 Israelis wearing costumes and dance during a party for the Jewish holiday of Purim at the Mahane Yehuda market in Jerusalem, March 13, 2017. The Jewish holiday of Purim commemorates the Jews‹ salvation from genocide in ancient Persia, as recounted in the Book of Esther which is read in synagogues. Other customs include: sending food parcels and giving charity, dressing up in masks and costumes, eating a festive meal, and public celebration. Photo by Hadas Parush/Flash90 *** Local Caption *** ôåøéí
öòéøéí
öòéø
îñéáä
úçôåùåú
úçôåùú
ùå÷
îñéáä