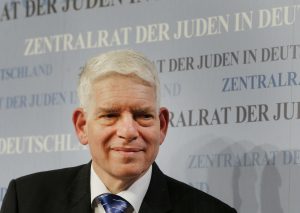 FILE - In this Nov. 30, 2014 file photo President Josef Schuster poses after a press conference in Frankfurt, Germany, after he was elected new President of the Central Council of Jews in Germany. When the leader of Germany?s Jews spoke out against the flow of Muslim migrants to Europe, a rabbinical student denounced his views as racist _ and ignited a debate over whether Jews are right to fear unprecedented levels of immigration from Muslim lands traditionally hostile to Israel. (AP Photo/Michael Probst, file) |