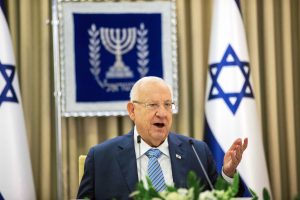 Members of the Yisrael Beytenu party meet with Israeli president Reuven Rivlin at the President’s Residence in Jerusalem on April 5, 2021, as Rivlin began consulting political leaders to decide who to task with trying to form a new government after the results of the country’s general election were announced a few days ago. Photo by Yonatan Sindel/Flash90