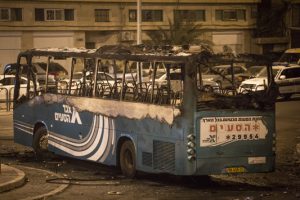 The bus which caught fire from molotov cocktails at a roundabout in the East Jerusalem neighborhood of Ras al Amud, near Mount of Olives, on September 17, 2015. A bus driver allegedly took a wrong turn, got into the Palestinian neighborhood and his bus was attacked by molotov cocktails. The bus was empty of passengers and the driver left the bus before it caught fire, unharmed. Photo by Hadas Parush/Flash90