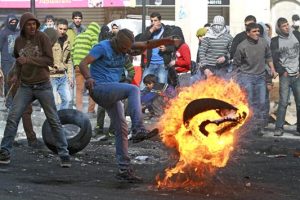 epa03600537 Palestinians erect barricades with burning tires as they clash with Israeli riot police during riots in the West Bank city of Hebron, 25 February 2013. Palestinians clashed with Israeli soldiers in the West Bank on 25 February after the funeral of a Palestinian who died in an Israeli jail. Thousands attended the funeral of Arafat Jaradat, 30, whose death on 23 February sparked riots across the Israeli-occupied West Bank. Palestinians claim he died of torture. Israel says the initial autopsy could not determine the cause of death and further tests were needed. EPA/ABED AL HASHLAMOUN